A trip to the Milk Bar ends with good bye

The first full day in Poland has been incredible so far. The day started with a 5 am jet lag induced wake up at our hostel? Why 5 am? Probably because we laid down to read and write last night and promptly fell asleep. So when the sun started peeking through the windows of our room and curtains, we found ourselves ready to begin the day.

Starting off after breakfast we rode the rush hour packed metro to Centrum again. The Warsaw metro during ruch hour could possibly rival the Washington D.C. during their commuter hours. Packed in with no room to move, the trip provided for some prime people watching. Upon arriving at Centrum stattion, we made our way to the TI for some needed maps and to find out about any special events going on.

With the news that free tours were offered in old town, we decided to continue with our plan of taking the Royal Way to old town Warsaw and the square. Turning on to Nowy Swiat, we ventured down it until we came upon A. Blikle pastry shop. Blikle is known for their paczki (rose flavored jelly doughnuts) that are famous inthe area and were seen on the Amazing Race. 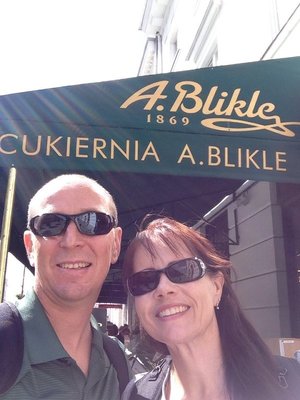 After a doughnut with rose jelly filling the world certainly looks like a brighter place. Or perhaps it was just the extra-strong espresso like coffee that is called Americano Kawa. We headed off to see several magnificent buildings, monuments, and unique sights. One of these is the Church of the Holy Cross where composer Ffryderyk Chopin's heart is inside one of the pillars in the church. Also in this building is a memorial to Poland's 22,000 POW's massacred by Soviet soldiers in 1940 near, Katyn, now a village in today's Russia. 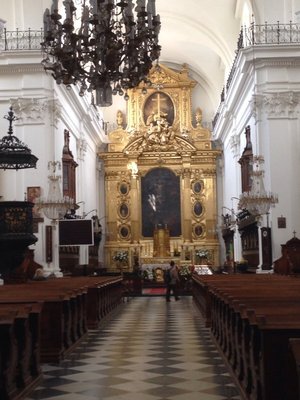 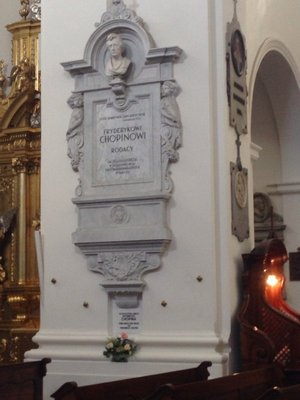 After a couple of more sights, we meandered over to Pilsudski Square. Once home to a torn down Russian Orthodox church, later named Adolf Hitler Platz, here now there is a stark reminder of Poland past and present. A plaque commorates the place in the square where in 1979 Pope John Paul II returned to Poland and spoke to the people. Also here is where the tomb of the Unknown Soldier is in Poland. In 1981 under the communists, when martial law was imposed, the citizens silently protested here by filling the square with a giant cross made of flowers. Today a cross is still here with the words, "Let thy spirit decend, let thy spirit descend, and renew the face of the earth -- this earth." This was one of Pope John Paul II's favorite sayings and a subtle dig against the communist regime during his visit.

Capping off our Royal Way journey was a hike up 150 steps to the top of St. Anne's Church. The sweeping views from the top of this tower give a birds-eye view of downtown Warsaw and beyond. It provides a stark contrast between the old and new city and the changes that have occured. 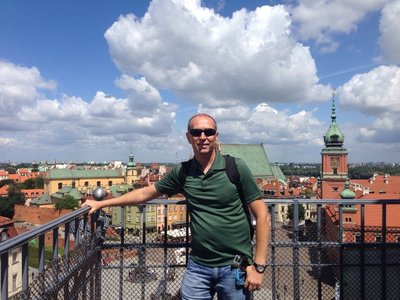 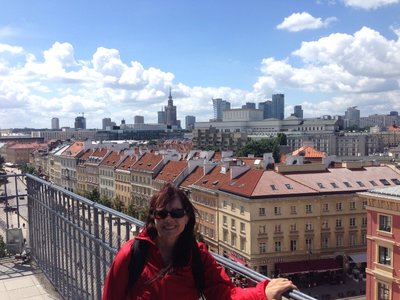 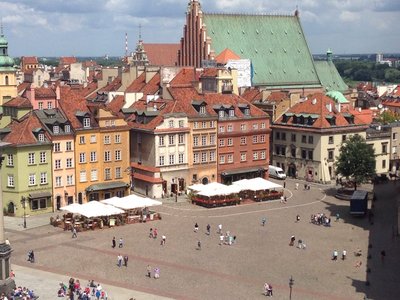 For lunch we ventured into a local establishment translated into English as a Milk Bar. A milk bar is a government subsidized cafeteria filled with locals seeking a cheap meal. A true cultural artifact and an experience we will never forget.

We chose Bar Mleczny Familijny. The menu, completely in polish was posted on the wall. None of the titles appeared in our guidebook, and no WiFi connection was available. We were unable to find a friendly local that could speak English to help these tourists out, and the little window you ordered from looked like a small confessional window with no hope of pointing to the dish we wanted.

As we turned to leave and look for another milk bar an elderly lady with two canes entered and we held the door open for her. She said thanks in English and that provided the chance. This kind elderly Pole helped us find a chicken dish on the menu, as well as boiled potatoes and a cooked beet dish that was out of this world. All this totaling 25 Zloty for two or about 8 USD. She explained to us that she had been coming to this milk bar since she was in college and it was still the same. The place was extremely clean and efficient, with some solid Polish cuisine. She told us that it invoked memories of her past and held a special place in her heart. Our encounter with her was too brief as we longed to hear more from her and learn what it had been like during communism. As she left she made us repeat after her: Do Widzenia or as she taught us Good-bye.

A fitting way to end our first experience with Warsaw, and its charming scenes. After this encounter, we are ready to speand more time exploring the city.