A Friday with the government

Crisp mornings in April are a beautiful thing when you are exploring a city that is rich in history and scenery. Starting the day off bright and early at the home of the money in Denver it was a brisk 42 degrees when we arrived to the Denver Mint at 7:45 a.m. After getting very friendly with the Federal Police who had us disrobe and go through security all that was missing was a cup of coffee, prior to the groping. Actually it wasn't that bad, if you don't mind those airport searches.

The Mint has expanded its visitor center, but still, unless you have never been before, all you really see is federal workers attempting to look busy by checking coins and shuffling paper from one desk to the next. Between looking up to see if the visitors were watching on worker on the floor, continuously walked back an forth between coins spewing out of a machine and his clipboard. Would have photos for your enjoyment, but that is strictly forbidden. The Pennies are too important to be photographed. 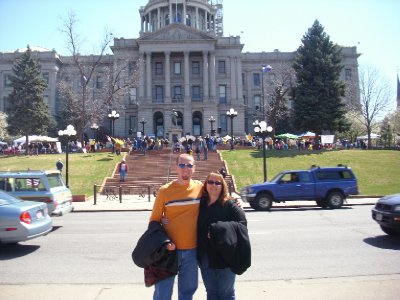 From the mint, we made our way to the Colorado State Capitol building where the big decisions for the state are discussed and compromised on. The capitol modeled after our nation's Capitol in Washington D.C., only one-third of the size, is definitely a beautiful site to see. Along with the marble floors from Marble, Colorado, Red Onyx from the state, white oak, polished brass and gold leaf are all a spectacular feast for the eyes. Not one detail is left unfinished.
Touring the capitol added a nice touch to the morning, but was definitely highlighted by a special tour to the top of the dome. No need to worry about your cardio workout when visiting the dome, as after ascending four floors from the basement where the visitor's entrance is located, you will enjoy 99 more steps up a narrow staircase to the observation deck. 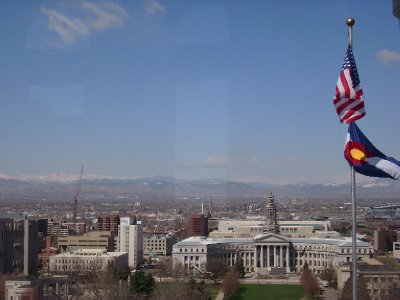 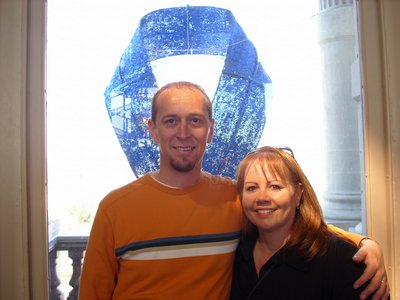 Finally, finishing our time in the halls of the capitol, we stepped out into the crisp air to be greeted by an April 15, Tax Day Tea Party rally on the west steps of the state capitol. Always interesting to see the various groups that make up supporters of the tea party.