Getting there is half the battle

International flights can be great, terrible, or sometimes a grind. Traveling from LAX to Arlanda just outside of Stockholm proved to be a combiarland nation of all three. Norwegian Airlines and their new 787 Dreamliner planes are the great. Travelling from LAX to Oslo throughout the night and on to Arlanda proved to be the grind. The terrible was the girl who sitting immediately behind us ran to the bathroom right before takeoff for a session of violent vomiting. 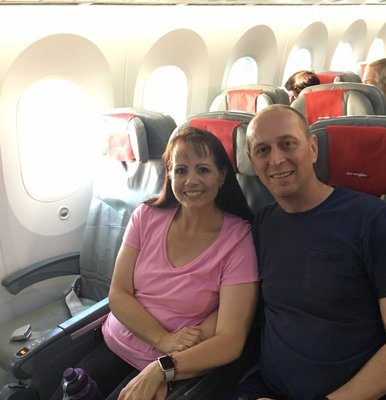 After a log 12 hours of traveling, we arrived to a rainy welcome in Sweden. A quick Uber ride got us downtown to Norrmalm. We checked into our quaint, well situated accomodations with very friendly staff. Located within easy walking distance to Gamla Stan, Centra Station and many other attractions, the Best Western Kom Hotel provided a welcome relief from the journey. By the time we checked into our room, it was nearing 7p.m. With sunset not arriving until 10:30 p.m., we decuded to find some dinner before calling it a day. Planning to head into the Old Town area, we began journying down a main road to the city center. After a couple of blocks we stumbled upon a mongolian BBQ and the decision was made to stop, eat and begin our real Swedish experience in the morning. The trek had taken more of a toll on us than we realized. Returning to our rooms at 10pm, we fell asleep as soon as our heads were on our pillows. 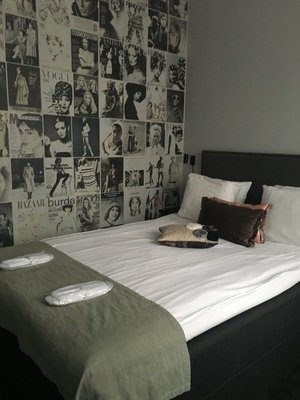 After an amazing breakfast provided by the hotel, we began our morning off with a walk to city hall. The breakfast included all the items needed to start your day right. Meats, cheese, fruits, yogurt and all the traditional european breakfast items were included with a couple of American staples to round it out. A light drizzle was in the air as we headed toward city hall and the tower. Featuring more than eight million bricks, the buiding is topped with an observation point providing one of the best views of the city and surrounding areas. Flanked by water on two-sides, the city hall allowed a good opportunity for photos, orienting oneself to the city and beginning the Stockholm experience. At times the drizzle fought to become rain, but the view from the top of the tower and the exertion from climping to the top, made up for the weather and warmed us up from the elements. To prevent congestion a limited number of visitors are allowed up to the top at a time, and the trip is timed so that others can enjoy the tower as well. 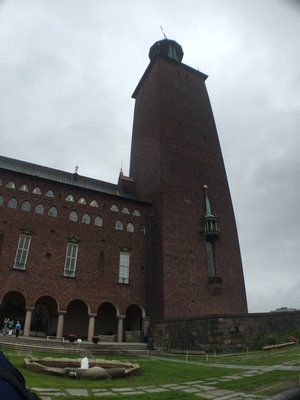 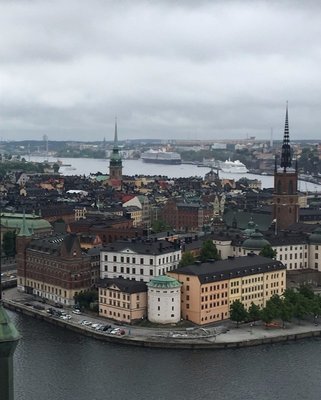 After viewing the city, we headed into the old town and Gamla Stan. Similar to most "old towns" found in european cities, Stockholm's is no different with numerous churches, cafes, souvenier shops and a Royal Palace calling visitors in to share all that there is to offer. Eventually we ended up at the Royal Palace where a stunning chapel designed with frescos on the roof and a great pipe organ is open to the public. From there it was time to view the changing of the guard. Sweden, whose military is stocked with young people required to give one year of service to the military has one of the best changing of the guard ceremonies. A band of soldiers riding in on stunning chestnut and white horses dazzled the crowds with music and showmanship, while the guards marched in and relieved each other. Highlights of the ceremony were almost outshined by the guards maintaing order over some unruly tourists. Watching the guards physically lift up and move some ladies that were not listening to them brought a chuckle from the assembled crowd who were obeying the guards orders. 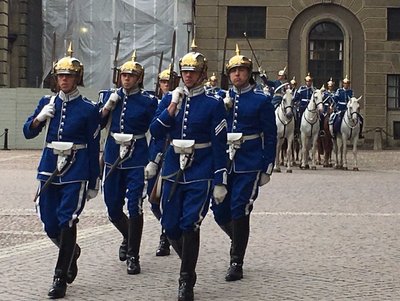 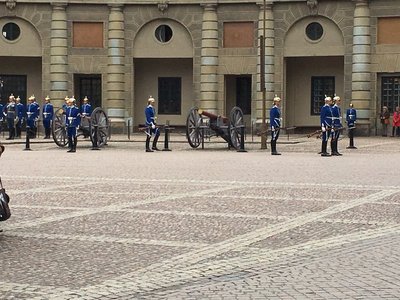 Once the parade and changing of the guard was complete it was time to find lunch. We chose the Stadismission for a meal that was satisfying and provided funding for Sweden's needy population. For a great price we were able to get a meal with salad and coffee included. Upon exiting, the sun had burst through the clouds brightening the day.