A Little Piece of Heaven on Earth

A night train from Split to Zagreb provided much needed rest and sleep at this point of the journey. Arriving in Zagreb at 6:30 a.m., we made our way via the tram to the bustling Zagreb bus station. The station has everything you need, a grocery store, chapel, coffee shops, bars, restaurants, and an adult bookstore.

Upon arrival at the station we discovered that a 7:30 bus was available to Plitvice Lakes, instead of the later 8:45 bus we had expected to have to take. Having eaten our usual breakfast of fruit and a pastry on the train, we got a quick coffee from the smokey coffee shop and eventually proceeded to our platform.

The bus route takes you through the capital city of Croatia and on out to the countryside. As you travel through some of the small towns, the bullet holes remain in the concrete buildings from the war a decade or two ago. Several of the houses still remain abandoned, signs of the Serbs that had been forced to depart in haste, and still have not returned. 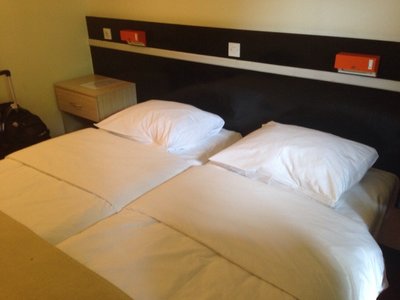 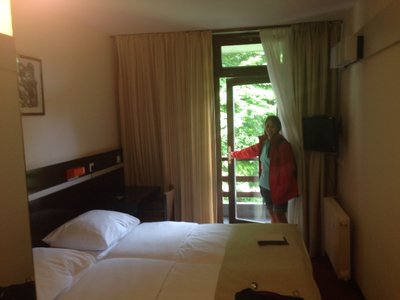 As you begin to climb in elevation the flat lands and fields are replaced by rolling hills and eventually mountainous terrain. Plitvice Lakes, with two entrances, is a national park and a UNESCO World Heritage site as well. It is also the spot of the first shots fired during the war. We decided to stay at one of the hotels in the park as the closest other guesthouses are 17km from the park, and busses are few and far between. 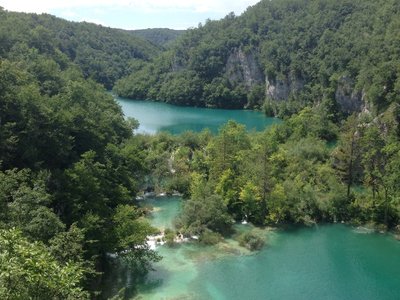 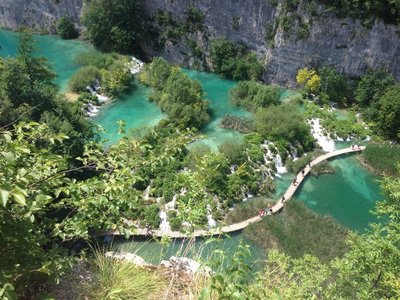 As we arrived at 10 a.m, we quickly dropped our backpacks in our room, grabbed some food, and got ready to see this incredible park. As we stepped out, we were greeted with a sight best described as Yosemite and Yellowstone on crack. The view was breathtaking and we both just exclaimed, "Wow!" Plitvice (pronounced (PLEET-veet-seh) is one of Europe's most spectacular wonders. Imagine Niagra Falls diced and sprinkled over a heavily forested Grand Canyon. There is nothing like this lush valley of 16 terraced lakes, laced together by waterfallls and miles of pleasant plank walks. Countless cascades and water that's both strangely clear and full of vibrant collors make Plitvice a misty natural wonderland.

There are signs with several different treks or you can create one of your own. The most popular trek starts from the middle of the two largest lakes and includes a tram, boat ride, and some hiking. The treks they suggest are 2, 3 or a 6 hour trek. The six hour hike appealed to us, however, it skipped the boat ride and not wanting to miss an opportunity to float accross these beautiful lakes, we decided to create a route of our own. 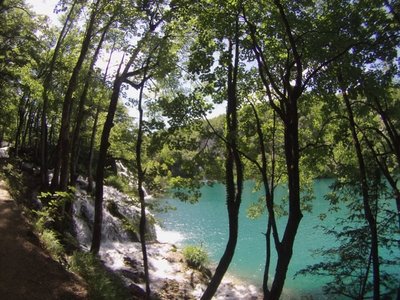 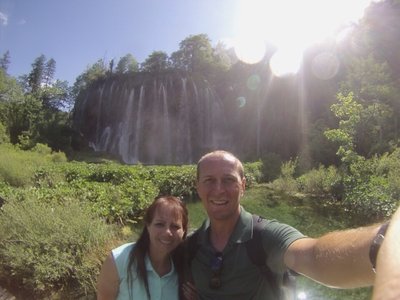 Starting at the Lower Lake, winding our way down a narrow stair set (some of the steps tiny, with others stuttered like climbing a ladder) and through a cave we found ourselves surrounded by the turquoise water that made up this beautiful area. As we procedded around the Lower Lake counter-clockwise, we encountered waterfall after waterfall, after reaching 100 we lost count, but the number is actually in the 1000's. We hiked up and down special scenic viewpoints placing us at the top of falls, overlooking the tourists down below at the base of these massive echoing giants. As we continued the trek, we walked along the small wooden paths leading you directly over the lakes in some areas, on the dirt paths beside the waters in others, and at times under a refreshing canopy of lush green trees with all varieties of plant and animal life around. The most common land animal seen was the field mouse who was even seen swimming on top of the water at times. In the lakes there were trout beyond numbers, although fishing is strictly prohibited. We continued to traverse the lower area, exausting as many sights as possible until we decided to backtrack to the boat crossing to the Upper Lakes 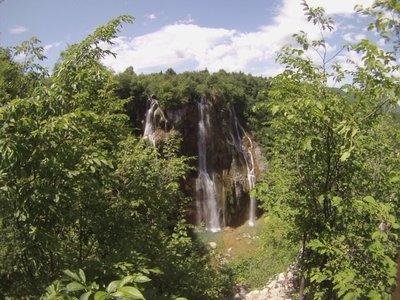 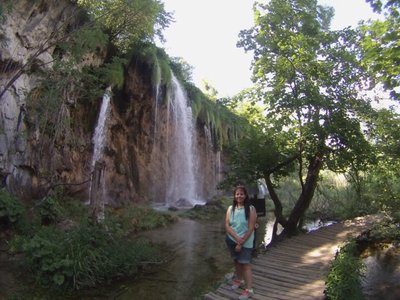 Once across we stepped off into a new wonderland of water and mist. As the afternoon trugged on, the sunlight mixed with mist provided a glorious backdrop for photos. Perhaps even more scenic than the Lower Lakes, although the lower has the largest single waterfall, the upper areas provide a quieter more tranquil atmosphere for reflection on the beauty of the surroundings. We continued exploring these lakes and finished with a trek just over 6 miles, but it was nearing 6 p.m., and we were running out of drinking water. 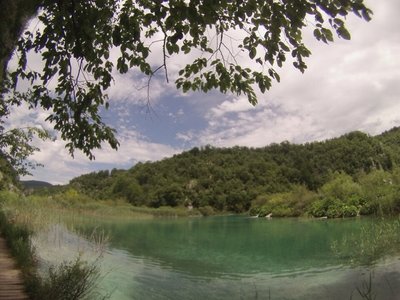 As we exited the floor of the canyon containing the lakes, we ascended over 583 meters to the top and took a shuttle back to our hotel. That night, I dined on fresh local trout, while Terri sampled the turkey that is served in the Plitvice region.

The next morning we awoke, fueled up with the free breakfast at the hotel, and went to catch a bus back to Zagreb. Luckily we were 40 minutes early to the bus stop as the bus arrived 35 minutes early, scheduled at 10:45, it picked us up at 10:10 and off we went. Leaving all others who were wanting that bus to be stuck waiting until 12:45 for the next bus.

Plitvice was a stop we knew we had to include on our trip, when we left the area, we were glad that we had made time for this gem, hidden in the mountains of Croatia, this is a little piece of heaven right here on earth.